New York New York, a top kid-friendly Vegas hotel, where the ambience of the Big Apple meets the busiest intersection of the Las Vegas Strip. Start spreading the news: You can vacation in Vegas while staying in New York City.

Things To Do at New York - New York Las Vegas 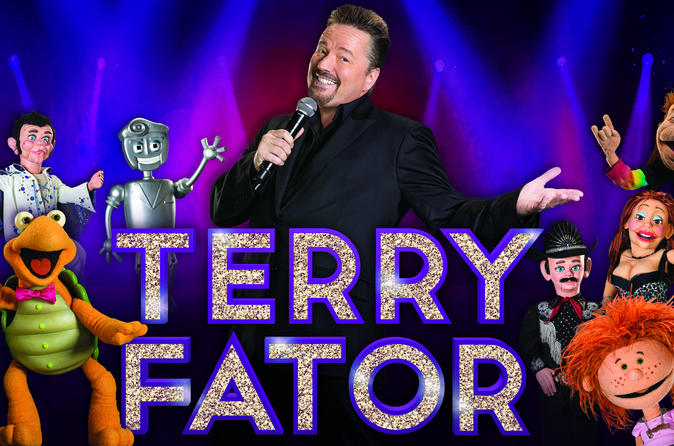 Spend the evening with celebrity impersonator Terry Fator and his motley band of puppets. The 2007 winner of the 'America's Got Talent' TV competition, Fator combines singing, comedy and ventriloquism in his show 'Terry Fator: The Voice of Entertainment.' Watch Fator banter with puppets including Winston, the impersonating turtle; entertainment attorney Berry Fabulous; and Vikki the Cougar — and be amazed at his spot-on celebrity impressions.
Check Prices at Vegas.com 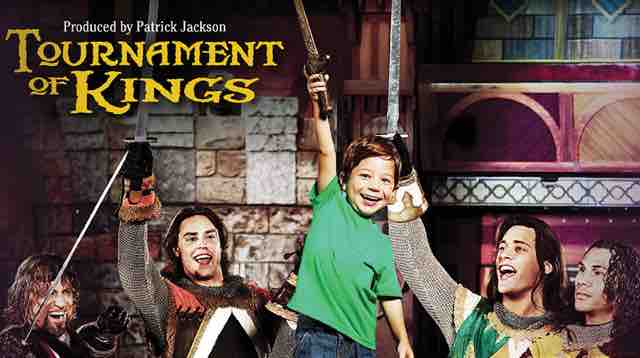 Just next door at Excalibur Hotel: Tournament of Kings in the long standing Arthurian jousting show at Excalibur hotel in Las Vegas which is popular not only because of it's Medieval theme, but because show watchers must eat their dinner with their hands!
Check Prices at Vegas.com 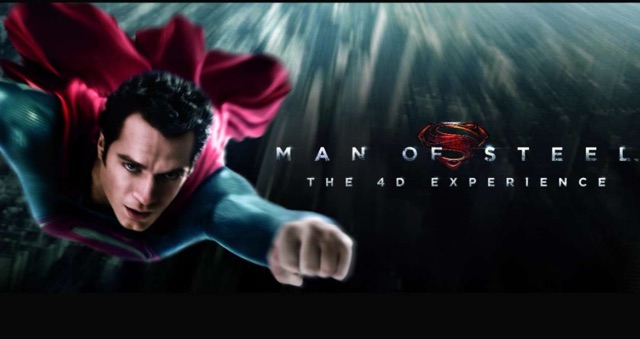 Just next door at Excalibur Hotel: The Magic Motion Rides at Excalibur let you experience the unique worlds in high-definition 3-D projection. The thrilling special effects place you right in the middle of the action. Here's how it works: you'll and your fellow riders be placed in a hydraulic powered seats while the movie of your choice is projected in a massive screen in front and around you. Rider seats shake and shimmy in perfect sync with the movie projected. It's a blast! Minimun height to ride is 42 inches. Magic Motion Rides run daily from 10am to 9:40pm.
Check Prices at Vegas.com

4. Thunder from Down Under

Just next door at Excalibur Hotel: Thunder from Down Under, the internationally acclaimed all-male dance revue, makes one promise of the night: to make sure you get exactly what you came for. And the Aussie imports make good on their promises, giving the females a feast of flesh and fantasy the Greek Gods would be proud of.
Check Prices at Vegas.com 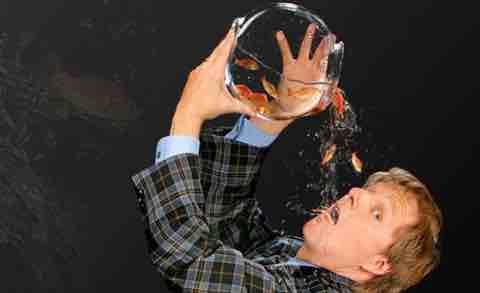 Just next door at Excalibur Hotel: Without a doubt, Mac King is the funniest and now, longest-running magician in Las Vegas. He'll hold you spellbound in his old Vegas-style showroom at Harrah's, while you hold your gut from laughing at his family friendly humor. King's self-effacing sense of humor, blended with his flawless sleight-of-hand and superbly corny imagination, elevate him to the top of his craft. Plus, his unique combination of endearing Southern charm and offbeat showmanship never fails to produce mesmerizing tricks and a giggling audience.
Check Prices at Vegas.com 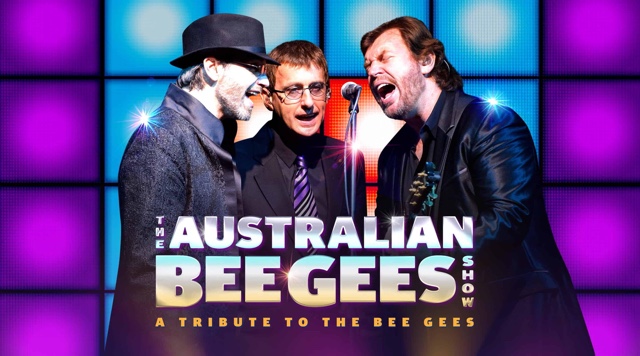 Just next door at Excalibur Hotel: Reviving the music of the famous Gibb brothers, The Austrain Bee Gees Show has performed to more than one million people in sold out theaters and concert halls in more than 40 countries. The group's unbelievable resemblance to the Bee Gees and their ability to emulate the Bee Gees' legendary sound has helped garner international attention from media and show goers alike throughout their 22-years of experience.
Check Prices at Vegas.com 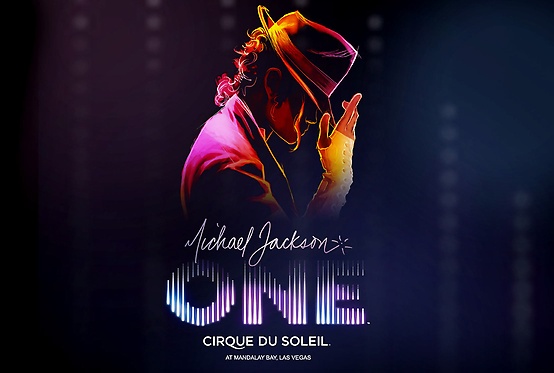 Just next door at Mandalay Bay: Alert the press! Cirque du Soleil's Michael Jackson ONE inside Mandalay Bay is hot, hot, hot. Time to bust out your moonwalk skills for a Las Vegas show that will make you scream “ooow ow.”
Check Prices at Vegas.com 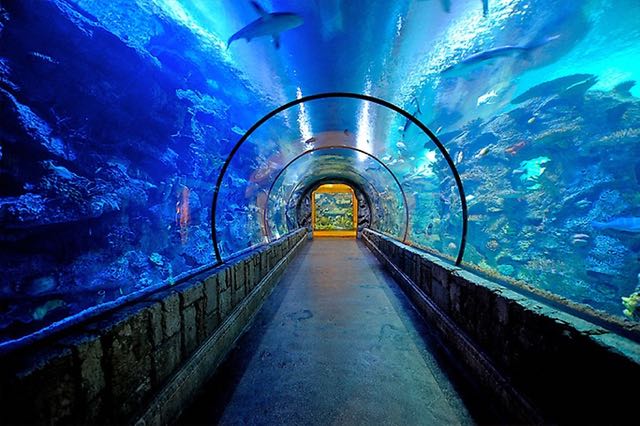 Just next door at Mandalay Bay: Shark Reef at Mandalay Bay offers 14 exhibits containing 1,200 species of exotic and endangered fish, reptiles and — of course — sharks. Shark Reef at Mandalay Bay is home in the dusty desert that is Las Vegas serves as a contrast but also shows the commitment the Strip has to entertainment and conservation. At Shark Reef you'll enjoy up-close views of more than 100 sharks, including 30 in the 1.3 million-gallon (4.9 million-liter) main tank, one of the largest in the US. By walking through two underwater tunnels, get an even better sense of what it's like to be under the sea.
Check Prices at Vegas.com

More Things To Do Near New York - New York

Visitors will also discover a 150-foot replica of the Statue of Liberty and a 300-foot-long copy of the Brooklyn Bridge. Plus, the exterior reflects distinctive New York City landmarks like the IRT Power Station, Grand Central Station, the Ellis Island Immigrant Receiving Station and the United Nations Building Assembly Hall. Speaking of the exterior, there's a pedestrian-oriented outdoor plaza that runs along the frontage of New York-New York. It includes a mix of shops like Stupidiotic, Swatch and I Love NYNY and restaurants with patios like the Shake Shack, a hugely popular "roadside" burger stand, and Tom's Urban. A stage is nestled in one end of the Brooklyn Bridge to showcase live bands and other entertainment.

A veritable city block of fine dining choices reflect the ethnically diverse cuisine from the Bronx to Brooklyn, Queens to Manhattan, Staten Island and beyond. The bakery-fresh bread of Il Fornaio will have you believing you're in Little Italy, while the atmosphere of Gonzalez y Gonzalez replicates one of NYC's most popular Mexican cafes. Succulent steak and seafood is prepared at Gallagher's Steakhouse, which has been a beloved New York City eatery since 1927. Burger lovers have a choice of Broadway Burger Bar and Grill and Shake Shack.

Venture to Greenwich Village for a quick nosh at the Village Eateries, an area of the hotel that offers authentic NYC-style street food such as pizza, kosher pickles, crepes and deli sandwiches.

Upstairs, the Coney Island institution Nathan's Famous hot dogs fits perfectly inside the Coney Island Emporium, a midway-style arcade with 150 coin-operated games. Also at the amusement center is the Big Apple Coaster. Designed to replicate the classic yellow taxicabs, it's guaranteed to thrill as it tears around the front of the resort at 67 mph. For something a little more relaxing treat yourself to a therapeutic body treatment at The Spa at New York-New York. SoHo-style shops, a fitness center and a seasonal pool with cabanas and three hot tubs round out the hotel's amenities. You don't have to be Frank Sinatra to sing the praises of New York-New York. With such a perfect location and so much to do, you'll definitely be able to make a brand new start of it on your Vegas visit.

M&Ms World is located just steps away from New York - New York, so it is impossible to miss. It is open every day of the year from 9 a.m. to midnight, so pick whatever time of the day or evening is most convenient. Top Tip: On the third floor, head to the station called "My M&Ms" where you and your children can customize the candy you purchased with a personal message all your own. Another not to be missed feature is a 10 minute movie in 3D called "I Left My M in Vegas."

If your kids love Coca-Cola, they will be excited to see and have their pictures taken in front of the world's largest coke bottle right by the MGM Grand. They will also have a fun time checking out the memorabilia in the Everything Coca-Cola Store and sampling different cola drinks from all around the world. The Everything Coca-Cola Store is located just steps away from the hotel at the Dryers Ice Cream Showcase Mall at 3785 South Las Vegas Blvd.

Enter VIRTUAL REALITY at MGM Grand hotel, and your squad is transported to an immersive universe at an epic scale. Exciting, social adventures await, and so do hordes of the undead, topsy turvy pathways, and rogue killer robots. Be free to explore the VR arena, compete, and fight together wirelessly. Up to 8 players play simultaneously. Minimum age is 13, beyon 9pm minimum age is 21.

The Luxor Hotel houses the Games of the Gods Arcade, a high tech entertainment center with the best selection of arcade games in Vegas!

New York New York offers a medium sized pool--small by Vegas standards--located at the rear side of the hotel. There are no real outstanding features other than in the middle of the pool is a fountain feature that kids can climb. Pools goers will see (and hear) the Big Apple Roller Coaster and screaming from passengers as it whizzes by, a negative for those seeking peace.

The pool is heated but is not open year round. Rafts and tube rentals are available.

Cabanas are an option for those seeking the ultimate in comfort. They hold up to nine guests: five comfortably fit inside with four loungers outside. Cabanas start at $200 and include the following ammenities:

Yoga at the Pool

Yoga might be just what you need after a long day entertaining in Vegas. Classes are available at the pool Friday through Sunday from 7:30 AM to 8:30 AM and cost $20 per session.

The Fall Brew Celebration is bringing six weekends of libations and countless beers to The Park in September and October--including up to 50 different pumpkin brews. The Park will celebrate the art of beer with themed weekends highlighting brews from around the world, beginning Sept. 21.