Las Vegas family shows on the Strip are hot! The Entertainment Capital of the World does not disappoint, even with kid-friendly shows. Running the gamut from Cirque du Soleil shows, dinner shows and magic shows and more traditional forms of entertainment, you are sure to find the perfect Las Vegas shows for kids. Whether you're 4 or 84, kids shows in Las Vegas are sure to entertain at any age. 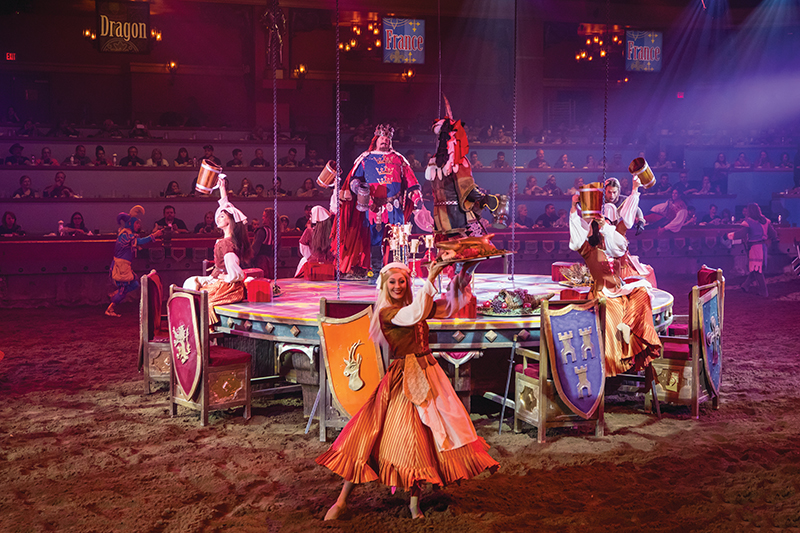 Through Dec 21, 2022. The Tournament of Kings turns into a holiday wonderland. There will be the mythical Merlin and even falling snow! It's the perfect way to eat, drink and be merry this holiday season. Cyber Sale: Spend $50, GET $100 Promo Code! Get Tickets Here

Of all the shows in Vegas, Mystere is the Las Vegas show that EVERYONE loves--even kids. If you've never seen a Cirque du Soleil show in Vegas, this is your chance. Mystere was the very first Cirque show in Las Vegas and has been around forever. Beyond votes from gazillions of kids, our own LasVegasKids show critic has voted it The Best Family Show in 2020, 2021 and 2022.
Vegas.com from $71.36

American's Got Talent TV might just be the perfect Vegas show for kids! If your children like the TV show so they'll love the live performance. This is the ultimate competition show in the US and now you'll be able to experience every unbelievable moment up close and personal.
Get Tickets Here

LOVE by Cirque du Soleil takes audiences on a magical journey through a fantastical world depicted through the music of the Beatles. Acrobatics, aerialists and a cast of colorful, intriguing characters combine to create a mystifying visual pared with an already sensational soundtrack.
Vegas.com from $75.63

Cirque Du Soleil has set the bar high with this creatively-curated 'Michael Jackson ONE', establishing it as one of the best shows in Las Vegas. Michael Jackson was no ordinary artist, and this entertaining showstopper requires four young adventurers to tell a story set to Michael Jackson's top hits. If the music isn't enough to dazzle you, the effects are sure to do the trick.
Vegas.com from $81.99

Set on a rotating stage and telling the story of life on a battlefield, KA moves between martial arts, balancing acts and swordplay. From suspended fight scenes to moving stages that float and turn vertical, this technically impressive show is entertainment on an entirely new level. This classic Cirque du Soleil performance is a perfect show for kids.
Vegas.com from $68

If you're looking for an alternate universe, look no further than this captivating Las Vegas Cirque de Soleil show, 'O'. Set amidst a 1.5 million gallon pool, this aquatic tapestry of eye-catching moments utilizes world-class divers, synchronized swimmers and performers of every description. We think this is one of the best Cirque du Soleil shows in Vegas.
Vegas.com from $112.6

Dance enthusiasts and casual fans alike will find plenty to love in this high-tech mix of stunning hip-hop influenced choreography, special effects, and the group’s trademark flair. Voted 'Best Family Show' and 'Best All Ages Show’ for three years in a row.
Vegas.com from $63.44

It's hard to put Blue Man Group into words: take a rock concert and a comedy show, add a heaping dash of whimsy, shake well and serve! There’s no act in the world like it and their enduring popularity proves it and it's the perfect Vegas show for kids.
Vegas.com from $50.1

Tournament of Kings transports audiences into the legendary realm of King Arthur in immersive and interactive style. Watch valiant knights on horseback jousting while you enjoy a hearty three-course meal eaten medieval-style: using your hands!
Vegas.com from $63.73

Vegas! The Show
V - Ultimate Variety Show
The Rat Pack is Back

In the great pantheon of 20th century entertainers, only a few achieved legendary status, and no one quite captivated the world like Michael Jackson. Jackson's oeuvre is largely family-friendly for kids ages 6-10. If you're looking to introduce your youngster to the genius that is Michael Jackson, you'll love this show.
Get Tickets

Hitzville is a nostalgia-filled trip through the Motown hits of yesteryear. Vocalist Jin-Jin Reeves Planet Hollywood's V Theater with an authentic Motown sound and experience that will have you clapping your hands and dancing in the aisles.
Vegas.com from $39.44

There were the naysayers, the haters and the diehard fans who said that Purple Reign would fail because Vegas has too many tribute shows. But has Prince EVER let us down?? I didn't think so. Jason Tenner has been performing his Prince tribute show in Las Vegas for more than a decade.
Vegas.com from $37.23

If it's condensed theatre you want, it's condensed theatre you'll get. Welcome to Potted Potter, the widely imaginative continuation of the J.K. Rowling star character Harry Potter and his gang of friends. Rather than recreating the successful New York City theatre performance, this show attempts to combine all seven Harry Potter books into one 70-minute show. You'll laugh, you'll cry, you'll burp out magic spells. For Potter fans, this is one show that won't disappoint your family!
Vegas.com from $40.49

Prepared to be wowed by this popular Vegas show “WOW” (yes, we resort to puns when necessary). “WOW” belongs in the Entertainment Capital of the World by virtue of its acrobatics, 3D-multi-media projections, theatrical lighting and one of the coolest water stages you’ve ever seen (wink, wink). They’re not holding back, and why should they? It’s Vegas, baby and we are in the city that loves to entertain. What sets this show apart from other Las Vegas shows for kids is that the stage is immersive with the audience.
Vegas.com from $49

6PM Show  All Shook Up

What would a trip to Vegas be worth if there weren't a show all about the premier showman himself, Elvis! Grab your blue suede shoes and head over to this tribute to the King of Rock 'n' Roll. This astounding show is backed by a live band, so be ready to cut a rug. "The King" will only be playing the hits, like "Heartbreak Hotel" and "Suspicious Minds." Be prepared to take a trip back in time with one of music's greatest artists, a show not to be missed.
Vegas.com from $50.95

It’s David freakin’ Copperfield. Need we say more? This legendary man is a world-famous magician who so happens to be our favorite neighbor with our favorite Las Vegas show. There is a reason David Copperfield has been around since what feels like the dawn of time. With the perfect combination of nostalgia, magic, showmanship, and charisma, master illusionist David Copperfield continues to thrill us time and again. Every child love magic tricks and your kids will love this show.
Vegas.com from $69.6

Criss Angel brings his special blend of magic and mind-melding fantasia to the Las Vegas Strip at Planet Hollywood. If you're a fan of his popular TV show, you can stop reading and move on to purchase tickets. If you are unfamiliar with this magician, imagine a man hovering above the Egyptian pyraminds and walking on water. That man is Criss Angel. In this show, you'll bear witness to 75 of his most iconic illusions all stylized with a gothic feel much like an old-fashioned circus.
Vegas.com from $86.71 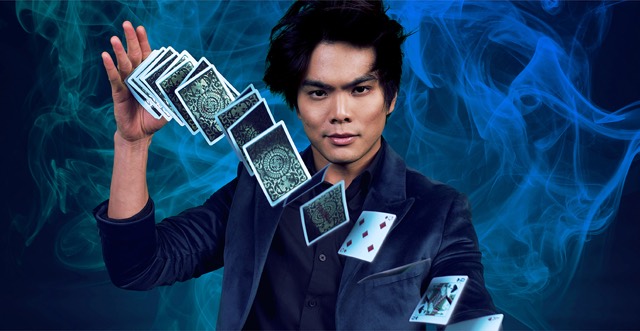 Shin Lim learned his world-class magic skills from.....you won't believe this: YouTube! But really, how good canthis YouTube edcuated magician be? Shin Lim’s been on the Penn & Teller show, and he won the 13th season of America’s Got Talent, and then went on America’s Got Talent: The Champions and won that too! Now he's got his very own magic show in Las Vegas. Not bad Shin Lim. You don’t want to miss this Vegas magic show.
Tickets from $66.48

Interested in the longest-running magician in Las Vegas replete with family-friend jokes, surprises and live animals? Then join Mac King and his goldfish, (don't worry, we won't spoil the surprise) these two have been renowned fixtures of the Las Vegas show circuit for over a decade and it's easy to see why. This is one of the favorite Las Vegas shows for kids.
Vegas.com from $29

From "America's Got Talent" to showcasing on Penn and Teller's show and winning the top award from Europe's most popular magic show, Xavier Mortimer is a name and show to watch in Vegas. As a former Cirque du Soleil performer, illusionist Xavier Mortimer creates an otherworldly magical experience combined with physical comedy and illusions. Comedy and enchantment meld together to create a dream world of magic. See other Las Vegas magic shows.
Vegas.com from $27.9

From "America's Got Talent" to "The World's Wildest Magic" on NBC, Nathan Burton headlines a Las Vegas show full of tricks, teleportation and transformation. As a magician, Nathan Burton has been entertaining in Vegas since 2001 with his wicked wit and formidable acts of magic.
Vegas.com from $20

30% Off  Piff the Magic Dragon

Magicians galore astound in Las Vegas, but only Piff the Magic Dragon has the World's Only Magic Performing Chihuaua. Mr. Piffles, as the dog is known, easily steals the show from the human star, known from his success on “America’s Got Talent” and touring with Mumford and Sons. They will perform a selection of their greatest hits from a repertoire that stretches over six previous critically acclaimed solo shows.
Vegas.com from $44.6

Forbes has listed Mat Franco's show as "The 5 Best Shows to See in Las Vegas Right Now" and we know why. It's not just that the entire world fell in love with him on season 9 of NBC's "America’s Got Talent," but his openess and the intimate showroom where the show takes place is what makes this show and showman truly unique.
Vegas.com from $57.99

Another startlingly good magician on the Las Vegas entertainment circuit is Murry the Magician. His true talent lies in larger than life tricks and illusions, like making a 1918 steam train locomotive vanish in mere seconds on "America's Got Talent" on NBC. Perhaps during the next show, he'll make a Ferrari appear from thin air or transform a showgirl into a 450-pound tiger...anything is possible.
Vegas.com from $26.65

From across the pond comes international mentalist Frederic Da Silva. With top honors from "France's Got Talent" and three prestigious European awards for being the top mentalist, this magician will arrest your mind...or read your mind! This Las Vegas show will leave you wondering what is an illusion and what is reality...a challenging thing to decipher here in Vegas. You be the judge!
Vegas.com from $28.25

Since 2008, Terry Fator has been stunning Las Vegas audiences across the board. With his combination of stand-up comedy, impersonating well-known musical artists with his enormous vocal range as well as his talent as a puppeter, this is one performer who truly astounds. Each puppet has a distinctive personality and vocal style, with a range of accents to boot.
Vegas.com from $50 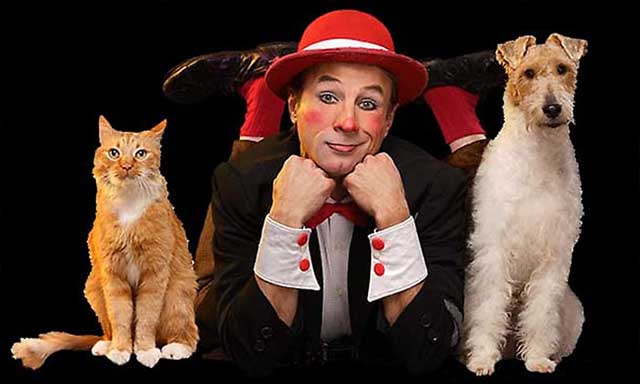 The newest celebrities in Vegas are 30 furry criters--all once in animal shelters--and one clown named Gregory. Popovich Comedy Pet Theater is just about the cutest show you'll ever see and it's one of the most family-friendly too because kids can't help but adore it.
Vegas.com from $24.44

Tape Face does indeed have tape over his mouth, creating a slapstick, silly, and scintillating show that is ideal for the whole family. This eccentric comedy show was featured on "America's Got Talent: The Champions".
Vegas.com from $39.19

Autumn in Sin City means the heat is on for awesome performances, concerts and headliners so be sure to check out our extensive list of Las Vegas Shows September 2022. We've got great deals on entertainment of all sorts including concerts, events and things to do in Vegas.

It's here, it's finally here! Our list of Las Vegas Shows October 2022 has been posted and you'll be excited to know that there are some fabulous performances this Fall in Sin City including concerts, events and things to do in Vegas.