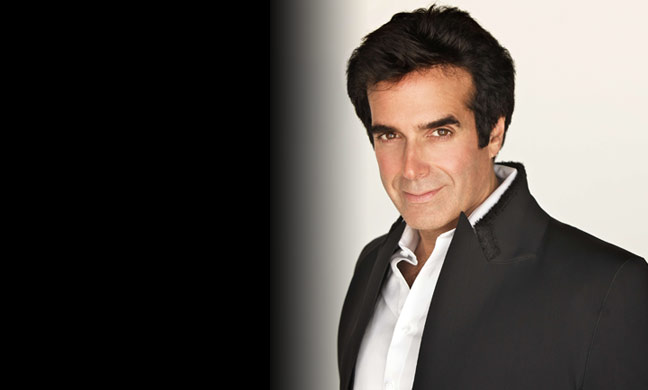 Tickets for David Copperfield are looking to sell out this weekend, it's a popular show afterall. Friday shows are 89% sold and Saturday tickets are 86% sold. Folks, if you want to see David Copperfield act now, his shows really do sell out, especially on weekends.

David Copperfield performs at MGM Grand hotel and casino Las Vegas, but David Copperfield tickets are not cheap so why not save a little cash on show tickets? We've called, searched, faxed (just kidding about the faxing!) in order to find David Copperfield discount tickets, coupons, promo codes...anything cheap, anything that'll save you some of your hard earned money. Spend less on concert tickets, have more for drinks! Here's what we've got so far:

Vegas.com, Las Vegas's homegrown one-stop-shop for Las Vegas offers some pretty darn good deals on Las Vegs show tickets and David Copperfield is no exception. Prices start at $89 at Vegas.com, check it out.

3. David Copperfield from $119 at BestofVegas

BestofVegas is offering discounted David Copperfield show tickets starting at $119. Good deal? Sure, it not a bad show ticket deal at all, but it doesn't beat Vegas.com's $89 discount show ticket for David Copperfield. Our advice: go cheap, as cheap as possible, because it's the same show whether you pay a low or high ticket price!

5. David Copperfield Groupon from . What???

Groupon has a reputation for offering super cheap stuff, including some really great deals on Las Vegas shows and concerts and, yes, a David Copperfield Groupon deal is currently available, it's a bit more pricey but gives you the flexibility to watch the show on any date rather than being pinned into a single one. If you're not exactly sure when you can watch the show, this might be a good option for you.

MGM Grand offers military personnel (active or retired veteran) discounts to a few shows including KA, Jabbawockeez and a few others but not for David Copperfield tickets.

AAA members can generally see up to 10% discounts on Las Vegas show tickets, but unfortunately not to David Copperfield.

There are no 2 for 1 offers for David Copperfield as of this writing though they are offered from time to time.

12. Half Off Show Tickets

We all love scoring half-off show tickets, especially for the more expensive shows. Some of you have fedback to me that you've seen half-off David Copperfield tickets out in the wild, but we can't seem to find them. When we do we'll list those right here.

MGM is offering the "Elevate the Magic", these Tickets at MGM consist of a meet and greet experience with David Copperfield. This deal includes front row seats, a meet & greet with David himself, a photo with you and David, and an autographed 8x10 headshot. Elevate the Magic is available in section A seats only meaning these tickets are north of $200 each. Cheap? No. Fun? Yes!

How to get cheaper tickets on Ticketmaster? This January at Ticketmaster you can save up to 50% on an tickets for shows See all deals in your area, or choose a specific offer type below.

Save 50% when you buy two tickets (excluding fees). Use offer code: TMN241

Save on ticket 4-packs to great events! No password required. Look for the Me+3 or 4-Pack ticket type at checkout.

Want even more deals? Get ‘em here. Save up to 50% off tickets with passcode: TMNTX

Yup, Cheaptickets.com has promo codes for great savings. Why not use them? Use promo code TICKETS10 by March 31, 2020 and save 10% on event tickets.

You're clearly searching for a ticket discount so if you're a SeatGeek fan you can use SEATGEEK10 and get $10 off your first purchase on SeatGeek of $150 or more.

There really isn't a bad seat at the David Copperfield theatre so don't spend extra on lower level seats...unless you want to see the show up and personal. See our David Copperfield Seating Chart post for more details on where to sit for the show.

Most show theaters in Vegas are designed with viewers pleasure in mind so there's rarely a bad seat in the house. That means the most expensive seats are not always the "best" seats for viewing, especially for shows such as David Copperfield. Booking early therefore gives you the best options to pick the seats you prefer, save some money and still enjoy the show.

You're in Vegas and need David Copperfield tickets? Gotcha. We can help. Firstly let's go over the basic questions asked:

Generally, David Copperfield shows times each night are 7pm and 9:30pm. The 7pm show time is far more popular with families and in higher demand during peak family travel periods such as Spring Break (March and April) and Summer (June, July, August), while the 9:30pm show time is much busier outside of these months. During Summer months David Copperfield will occasionally offer a 4pm afternoon show time which is ideal for those traveling with younger children.

Where to Buy David Copperfield Tickets

It is better to buy David Copperfield tickets online or at the box office? We can't stress enough: David Copperfield mostly sells out in advance, especially during busy months, this is generally the case with all Las Vegas shows shows. How can you tell if your dates of travel are during the busy months? If you traveling during the months of December, January, March, April, June, July, August or early September you're traveling in the Las Vegas peak travel seasons.

Buying at the Box Office is a good option if you're traveling outside of the busy months since there's a higher chance of getting a good cheap ticket deal. Buying David Copperfield tickets online is the best bet since they're generally cheaper if purchased in advance.

Are the days of discount tickets in Vegas over? I couldn't be more emphatic when I write NO WAY JOSE! The discount tickets days have only just begun and I for one am absolutley jazzed about it because it means I can bring you more show ticket deals.