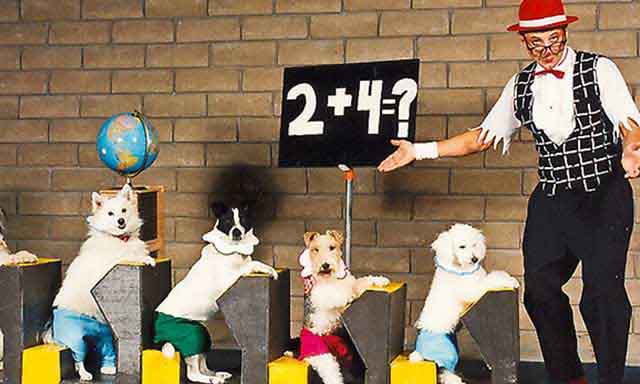 Viator is a big wig in the online attractions and show tickets world but doesn't always offer the best pricing and that goes for Popovich Comedy Pet Theater Las Vegas show tickets too...they're currently offering is $29.

If you're looking for a ticket website with dirt cheap prices you'll like Showtickets.com. They just might be one of the best Vegas show tickets vendors around...along with Vegas.com--you've gotta love those guys! Showtickets.com has got Popovich Comedy Pet Theater show tickets starting at $64. Now is that a good deal? Yup, pretty good. Is it the best deal for Popovich Comedy Pet Theater? Read on! Fortune favors the prepared...and well read!

BestofVegas has got an amazing offer that we think is great! They're offering VIP child tickets--not general admission tickets but VIP from $64. This, folks, is what we consider a darn good Vegas show ticket deal.

By now you're surely starting to see a pattern--most Vegas ticket vendors are offering Popovich Pet Comedy Theatre child tickets for $74.98, Groupon is no exception. If you're a fan of theirs, get Popovich tickets at Groupon from $74.98.

Oh daaaarnnnn! We did have a Popovich Comedy Pet Theater promo code...two in fact, but they've expired. Here's what you missed. You could have used Showtickets.com's "20CYBER" promo code and saved $20. But, alas, those have expired. Ugh. When BestofVegas and Showtickets publish promo codes and/or coupons again, we'll be right on that for you!

Sometimes it pays to be a local (and cheap), but sadly not today, not for this show. Popovich Comedy Pet Theater does not offer a Nevada locals discount at this time.

Popovich Comedy Pet Theater doesn't currently offer cheap tickets for students. Be sure to check back since from time-to-time they do resume the offer.

Visit Las Vegas in the Off Season

Some believe that better show ticket prices can be had once they arrive in Vegas. That may sometimes be the case in New York City or London but Las Vegas shows sell out, especially of the Popovich Comedy Pet Theater variety, so waiting to buy means tickets are mostly more expensive once in Las Vegas. Buying online and in advance is usually the best option. But, hey this is Vegas afterall so if you want to gamble...

Most show theaters in Vegas are designed with viewers pleasure in mind so there's rarely a bad seat in the house. That means the most expensive seats are not always the "best" seats for viewing, especially for Popovich Comedy Pet Theater. Booking early therefore gives you the best options to pick the seats you prefer, save some money and still enjoy the show.