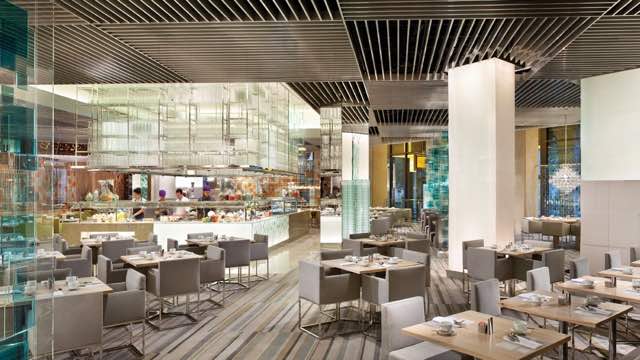 After you've walked the Las Vegas strip and seem just about all the best shows in Las Vegas, you'll need to fill that hungry belly. The Bacchanal Buffet will be temporarily closed until further notice. The Caesars Palace buffet, named Bacchanal Buffet is a highly rated, upscale buffet experience that just might be the place for you. At 25,000 square-feet it's got seating for over 600 people making it one of the larger buffet on the Las Vegas Strip. Bacchanal Buffet offers over 500 different dishes, including popular Vegas favorites like king crab legs, prime rib, grilled lamb chops, dim sum, red velvet pancakes, fried chicken and waffles, and made-to-order soufflés.

We love this deal: Bacchanal Buffet at Caesars Palace, with VIP Express Line passes only $35.99! Includes a LINE PASS! Why is this such a good deal? It's far cheaper than buying once in Vegas...and, best of all, because we all hate standing in line for an hour to feed our already hungry belly, this buffet deal by Groupon includes a VIP Line Pass! You save money AND don't wait to eat...wait, is this a dream?!?

Las Vegas buffets are second to none, and so are the prices these days, and since we all want a buffet deal, here are the top deals right now! These discounts are so deep who needs a Las Vegas buffet coupon? Don't print, buy online and save a tree!:

Bacchanal Buffet has been voted Best Buffet by USA Today so you know you're getting good quality grub here and a great view, the buffet overlooks the Garden of the Gods pool complex.

Morning, brunch and dinner Bacchanal Buffet price range from $39.99 to $64.99, not a cheap place to eat but certainly worth the splurge. If you've got kids in tow rejoice, they eat free when under 4 years old and kids between 5 to 10 years old are given what amounts to about a 50% discount--half off! Not bad.

There are a few Bacchanal Buffet coupons and deals out there but by far the best we've found are these promotions:

The Caesars Palace buffet deals currently available at Groupon are pretty darn good. You get all-you-can-eat breakfast or dinner, with drinks and a line pass. Check out these Groupon offers:

Travelzoo has a Caesars Palace Bacchanal Buffet deal of it's own that offers the following options. Note that these deals are pretty similar to that of the Groupon deal listed above--might they be the same? We really don't know but unlike Groupon, if you purchase a Bacchanal Buffet deal with Travelzoo you'll be sent a voucher in the mail, which isn't quite so convenient.

If you're in a rush and can't spare the time to sit and feast, Bacchanal Buffet now offers "Feast To-Go". Grab all your favorite items from Bacchanal Buffet, place them in a box, and be on your way.

If you're a Caesars Rewards member, you'll have access to preferred pricing to "Buffet of Buffets Pass", you pay one price and get access to up to five buffets in Las Vegas for a 24-hour period. Indulge in all-you-can-eat sushi, prime rib, crab legs, pasta, desserts and much more.

Prices for the Buffet of Buffets Pass

Upgrade Your Pass to Include Bacchanal Buffet:

Read a bit more on Buffet of Buffets here.

Not unlike most buffets in Las Vegas prices rise for special event days and holidays.