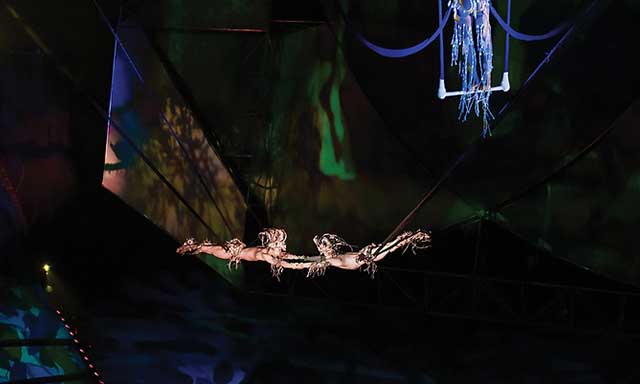 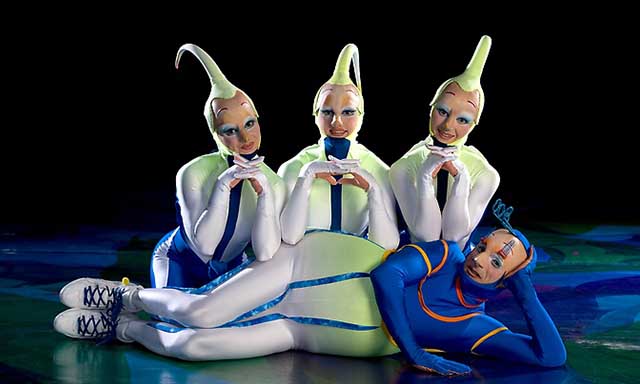 Mystere tickets seasonally vary in price from $60 to $100 for entry level seats. Mystere performs at TI hotel and is Cirque du Soleil's longest running shows. Not to be confused with the 1950s French fighter-bomber Dassault Mystère--but possibly named after it, Mystere is one of seven resident shows by Cirque du Soleil.

A gigantic baby? A gigantic, inflatable snail? OK, we slurped down our drinks before they could be spiked so, what gives with the hallucinations? Well, the catch is that there is no catch – you’re just at a Cirque du Soleil show and a damn good one at that.

Like fine art, the storyline of Mystère at Treasure Island is left up to individual interpretation. But one thing about this production is for sure: Mystere, which also happens to be the first Cirque du Soleil production in Vegas, is so entertaining you’ll want to stay for an encore after the final bow. Oh, and speaking of the performers, we always wonder whether or not these crazy-talented people are even human. They’re like the ultimate example of “don’t try this at home.” They fly, they muscle up poles like tree frogs and make us feel pretty damn bad about not being able to touch our toes. They’re friggin’ amazing, and they have no fear and apparently no bones in their super-bendy bodies.

Performing stunts like quadruple flips off see-saws and other sick tricks we average folk couldn’t even dream up if we tried, this show is so unreal you just kinda have to let it happen. Emphasizing family-friendly, awe-inspiring athleticism and imaginative imagery, Mystere embraces all the signature Cirque du Soleil elements that have made the production one of the OG companies on the Las Vegas Strip.

LasVegasKids is one of the few places where you can find the best Mystere ticket prices.

Editor's note: Mystere Open Rehearsals are not currently on offer. Some have branded the Mystere Open Rehearsals "try before you buy" but we don't think it comes close to replacing the actual show. In the rehearsals you can get a look inside the production, observe cast members as they rehearse for the evening’s performance. The complimentary open viewings will take place at the Mystere Theatre inside Treasure Island hotel-casino. Guests of all ages are welcome to attend.

Questions and Comments Ask a question
What's Mystere's child ticket age?
Mystere is for allows all ages but children over 1 year old must purchase a ticket even if the child will be on a parent’s lap during the performance.
Are there family tickets?
None for Mystere.
Can my 4 year old go to Mystere?
Yes, this show allows all ages.
At what age must children purchase tickets?
Tickets must be purchased for children over 1 year of age.
What is the age requirement for this show? My daughter is 2. Would she be able to attend this show ?
There is no age requirement, all ages are welcome, however tickets must be purchased for children over 1 year of age even if they sit on a parent's lap.
Can I bring food to Mystere show?
You can bring outside food/drinks into the theater but it's very limited. See our Mystere review.
Can my 5 month old go to the show? And my other daughter is 2yrs is she able to go as well?
Yes that's correct, this show is all ages. Your 5 month old can go and will be admitted free as children under 1 year of age are free on a parent's lap. Your 2 year old must pay a normal ticket price.
Do you offer 2 for 1 Mystere tickets?
2 for 1 Mystere tickets are on offer from time to time but due to the popularity of this show not very often.
Where's your seating chart?
Once you press a show date and time button below and select your tickets you'll be prompted with a seating chart.
Recently Seen

Mystere is an acrobatics show by Cirque du Soleil. Mystere offers 4 seating categories and the least expensive typically starts at $60. We have Mystere tickets at a low cost and can save you up to 50%. Mystere performs at TI hotel.
Child tickets: Child tickets required for over 1 year of age even if the child will be on a parent's lap.
Minimum age: All ages. Under 18 must be accompanied by an adult.
Show length: 90 minutes. One intermission.
Where to sit: All seats offer exceptional views. Front seats can mean looking up too long.
Cheap tickets: See below for Mystere discount tickets offers