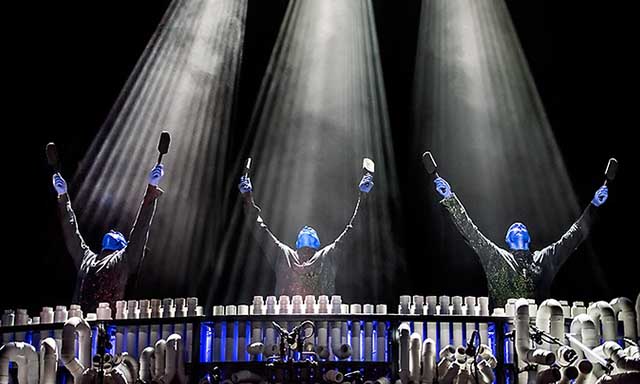 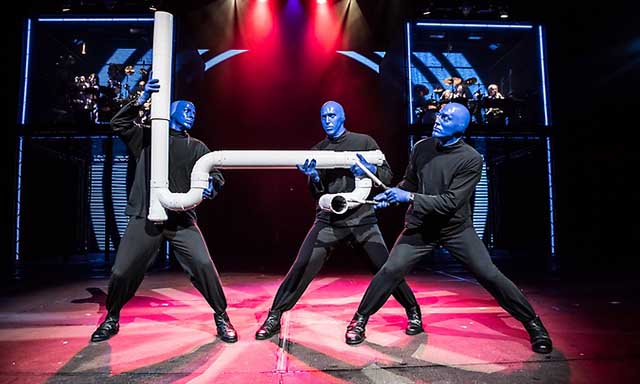 Blue Man Group Las Vegas is a creative, mesmerizing, energetic, rhythmical, like nothing you've seen before, and best of all, it's performed twice per night at Luxor hotel Las Vegas.

Blue Man Group can be called the ultimate sensory overload show. Three black cladded mute men covered in shiny cobalt blue paint take the audience through a journey of sound, light and color. They entertain using music and lights, drums, neon, and movement. This show is fun, bright, visual, colorful, funny and bursting with theatrics and entertainment. There's a reason why 35 million people around the world have attended a Blue Man Group performance, because it's fun and creative and bizarre.

Blue Man Group is one of those truly creative shows that appeals to all people of all ages. Whether you're 67 or 5 years old, you'll be mesmerized throughout the entire show, or party more like because you're part of the production! The Blue Men have a magical way of taking down that "fourth wall", the imaginary barrier at the edge of the stage that persumably separates performers from audience.

Blue Man Group plays at the Blue Man Theater at Luxor hotel. Seating 800 people per show, this theater is "cozy" by Vegas standards. This means you'll really feel the impact of the drums, pipe percussions and bass emanating from the speakers.

Blue Man Group Show Tickets, Save up to 45%

Hello Savvy Shopper! After all that Las Vegas shows research you've done it's come down to buying Blue Man Group tickets! Yaaaay! Here's some cost savings advice to keep in mind while you shop:

Quite a number of trusted websites sell Blue Man Group show tickets including Expedia, Ticketmaster, Stubhub, Groupon and Viator (a TripAdvisor website). But if you're like us you want to get the lowest price on Las Vegas show tickets possible, and normally that means buying through us. We have an affiliation with Vegas.com who, almost always, offer the best pricing possible on show tickets in Vegas.

Category C are the cheapie seats, generally priced at almost half compared to Poncho Seats (Category B seats). While Category C seats won't offer the center stage view of Poncho Seating, the stage sightlines and show experience are excellent. Granted the stage won't be 15 feet from your seat, more like 50 feet so it's a slightly different experience, but an excellent one nonetheless. We sat in Category C seats...we loved them; we were still close enough to the stage to have a good view of the performance and we saved about $50 each in show tickets.

This showtime is largely attended by families. This timeslot is normally offered during holiday weekends and longer school breaks such as Summer holiday and Christmas break. Expect kids to comprise a good size of the audience. This performance sells out quite quickly but pricing is mostly inline with the other two showtime slots.

The 7 p.m. show is most popular because it's the perfect "dinner and show" timeslot. From time to time some Luxor Hotel's restaurants offer pre-show dinner specials. If you're watching the show with younger children, The Buffet at Luxor is a the perfect spot for a pre-show dinner: it's a great buffet and children under 4 eat free. Not a bad deal. Dinner buffet starts at 3 p.m.

This showtime slot is popular with the 18+ crowd and if you're keen to have a more adult experience, this is your showtime. As with the 7 p.m. show, dinner at the Luxor buffet is a great pre-show option.

The Blue Man Theater is divided into three seating groups: Category A, B, and C. Category B, closest to stage center, is "Poncho Seating". Category C, the most popular and least expensive seating, is located at the top and far sides of the theater. Category A are seats located center of stage above Category B but below Category C.

Poncho Seats are given their name because audience members are given plastic ponchos to wear upon entering the show room to protect their cloths "inadvertently" being splashed with water, fruit, paint, and the like by Blue Man Group performers. Keep in mind those ponchos won't protect your face from all that wet gooey stuff so if choosing Poncho Seats be ready for a bit of splatter to get everywhere.

"Poncho Section" seats are fun, and they're more expensive too. If you'd rather not risk getting getup dirty, opt out from this section.

Blue Man Group is appropriate for of all ages but children under 3 are not recommended due to percussive music. Those 16 and under must be accompanied by an adult 18 and over.

If You're Sensitive To Strobe Lights, Beware

If you, or anyone in your party, has a sensitivity to strobe lights, note that they are used in portions of the Blue Man Group Las Vegas show. You can still attend the show but be sure to let the theater manager know so she/he can help you leave the showroom before the strobe lights occuer.

Light snacks and beverages, including alcoholic beverages, are available for purchase at the theater lobby.

A few Pina Coladas or Margaritas or [insert your favorite drink here] and eventually you've gotta go! It's normal and you'll be pleased to know that while the Blue Man Group Theater has no bathrooms, just across the the entrance to the theater there's a set. Both men's and women's have changing tables for those who'll take children in diapers. Be sure to let show personnel that you'll be leaving and re-entering.

After the show be sure and visit the Gift Shop. You'll find BMG souvenirs galore!

It seems lately Blue Man Group Las Vegas is making a run at dethroning Mystere as the most family-friendly Las Vegas show. We'll admit, it's close, really close, but let's take step back because two things might just be preventing Blue Man Group from taking our Best Las Vegas Show for Families crown in 2019: gooey liquids and AMP wattage. We love the percussions and drums, the vibrant colors--mostly blue, we love how the show crosses cultures, languages and is understandable my all, but Blue Man Group's "Poncho Section" seats can be annoying to some. It's not always so understood just how fully audience members can get drenched and this isn't so cool for parents with kids in tow. Second, the music can at times be a bit too loud which is fine for most, but sensitive little ears can occasionally tire of it.

Blue Man Group currently has ongoing shows in Las Vegas, Boston, Chicago, New York City, Berlin and Orlando and is on tour in Amsterdam, Netherlands; Tampere and Helsinki, Finland; Brussels, Belgium; Tokyo, Nagoya, and Osaka, Japan; and Taipei, Taiwan. There are no currently scheduled 2019 tour dates for the US.

A typical Blue Man production employs 7 to 9 full-time Blue Men actors, selected through a casting process held multiple times per year in New York City and Los Angeles. Casting auditions include acting, drumming, and string, each seeking a distinct type of character for the show. The roles call for very particular sets of acting, drumming and physical characteristics. Casting calls are generally announced via the website backstage.com.